‘Living drug factories’ might treat diabetes and other diseases 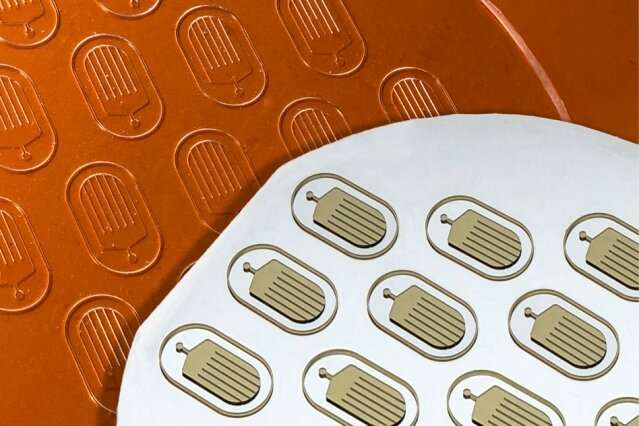 One promising way to treat diabetes is with transplanted islet cells that produce insulin when blood sugar levels get too low. However, patients who receive such transplants must take drugs to prevent their immune systems from rejecting the transplanted cells, so the treatment is not often used.

To help make this type of therapy more feasible, MIT researchers have now devised a way to encapsulate therapeutic cells in a flexible protective device that prevents immune rejection while still allowing oxygen and other critical nutrients to reach the cells. Such cells could pump out insulin or other proteins whenever they are needed.

“The vision is to have a living drug factory that you can implant in patients, which could secrete drugs as-needed in the patient. We hope that technology like this could be used to treat many different diseases, including diabetes,” says Daniel Anderson, an associate professor of chemical engineering, a member of MIT’s Koch Institute for Integrative Cancer Research and Institute for Medical Engineering and Science, and the senior author of the work.

In a study of mice, the researchers showed that genetically engineered human cells remained viable for at least five months, and they believe they could last longer to achieve long-term treatment of chronic diseases such as diabetes or hemophilia, among others.

Suman Bose, a research scientist at the Koch Institute, is the lead author of the paper, which appears today in Nature Biomedical Engineering.

Patients with type 1 diabetes usually have to inject themselves with insulin several times a day to keep their blood sugar levels within a healthy range. Since 1999, a small number of diabetes patients have received transplanted islet cells, which can take over for their nonfunctioning pancreas. While the treatment is often effective, the immunosuppressant drugs that these patients have to take make them vulnerable to infection and can have other serious side effects.

For several years, Anderson’s lab has been working on ways to protect transplanted cells from the host’s immune system, so that immunosuppressant drugs would not be necessary.

“We want to be able to implant cells into patients that can secrete therapeutic factors like insulin, but prevent them from being rejected by the body,” Anderson says. “If you could build a device that could protect those cells and not require immune suppression, you could really help a lot of people.”

To protect the transplanted cells from the immune system, the researchers housed them inside a device built out of a silicon-based elastomer (polydimethylsiloxane) and a special porous membrane. “It’s almost the same stiffness as tissue, and you make it thin enough so that it can wrap around organs,” Bose says.

They then coated the outer surface of the device with a small-molecule drug called THPT. In a previous study, the researchers had discovered that this molecule can help prevent fibrosis, a buildup of scar tissue that results when the immune system attacks foreign objects.

In this study, the researchers tested polymer coatings with pores ranging from 400 nanometers to 3 micrometers in diameter, and found that a size range of 800 nanometers to 1 micrometer was optimal. At this size, small molecules and oxygen can pass through, but not T cells. Until now, it had been believed that 1-micrometer pores would be too large to stop cellular rejection.

In a study of diabetic mice, the researchers showed that transplanted rat islets inside microdevices maintained normal blood glucose levels in the mice for more than 10 weeks.

The researchers also tested this approach with human embryonic kidney cells that were engineered to produce erythropoietin (EPO), a hormone that promotes red blood cell production and is used to treat anemia. These therapeutic human cells survived in mice for at least the 19-week duration of the experiment.

“The cells in the device act as a factory and continuously produce high levels of EPO. This led to an increase in the red blood cell count in the animals for as long as we did the experiment,” Anderson says.

In addition, the researchers showed that they could program the transplanted cells to produce a protein only in response to treatment with a small molecule drug. Specifically, the transplanted engineered cells produced EPO when mice were given the drug doxycycline. This strategy could allow for on-demand production of a protein or hormone only when it is needed.

This type of “living drug factory” could be useful for treating any kind of chronic disease that requires frequent doses of a protein or hormone, the researchers say. They are currently focusing on diabetes and are working on ways to extend the lifetime of transplanted islet cells.