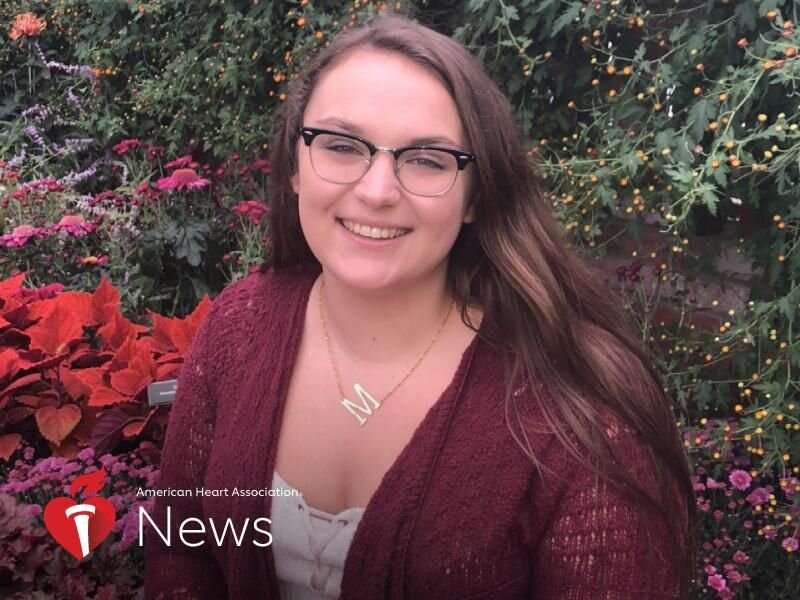 In late October, she was visiting her parents near Scranton, Pennsylvania, when she learned one of her roommates had been exposed to the virus.

Madeline panicked, realizing that if the coronavirus had been passed along to her, then everyone she was around could be in jeopardy of catching it. She canceled plans to celebrate a friend’s 21st birthday and pledged to stay in her bedroom with a mask on.

“I was mostly worried about exposing my parents,” she said.

Madeline developed a dry cough and lost her sense of taste and smell. She returned to Philadelphia, where she’s a junior, and got tested for COVID-19. She had it.

Madeline seemed to get lucky. She never even had a fever.

“It was no worse than a cold,” she said. “By the time my quarantine was over, my symptoms were gone and even sense of taste and smell came back.”

Three weeks later, she returned home for Thanksgiving break and was out walking her mini goldendoodle, Sadie, when she found herself unusually short of breath.

“Honestly, I thought I was just out of shape,” she said, blaming it on her inactivity since getting sick.

The day after Thanksgiving, her shortness of breath was joined by chest pain. When it got worse overnight, she went to an urgent care clinic, fearing she could be developing post-COVID-19 pneumonia. She tested negative for the flu and COVID-19 and was given medication for suspected pneumonia.

Madeline slept all day. Now came the high fever she’d avoided before. The next day, she felt worse.

“I woke up and the pain was excruciating,” she said. “I was weak and couldn’t catch my breath.”

Although Madeline had outgrown seeing a pediatrician, the doctor was a family friend. He dropped off a pulse oximeter, advising her to go to the ER if her oxygen level fell below 93%. Hours later, it registered 90%. Madeline wanted to shower before going to the hospital, but needed the help of her mother, Christine Neville.

“She couldn’t hold her arms up to wash her hair,” Christine said. “At that point, I started to panic because I realized, ‘She’s really not OK.'”

Initial testing showed fluid in Madeline’s lungs. A doctor told Madeline that could be pneumonia, but it “looked peculiar.” No beds were available at that hospital, so she was transferred.

For the next three days, Madeline was treated for pneumonia. She wasn’t improving. The following day, she passed out during an attempted blood draw.

Christine was terrified, too. COVID-19 restrictions prevented her from being at the hospital. Madeline had been giving her updates, but then no news arrived for several hours. She called the nurse and learned that Madeline was in intensive care being treated for heart failure.

“I immediately wanted to throw up,” Christine said. “My kid was sicker than she’d ever been in her life and I couldn’t be there.”

Soon Madeline needed more specialized care. As she was being readied to go by helicopter to a Philadelphia hospital, Christine was allowed to spend time with her daughter, who was swollen and struggling.

“She was really gasping to get air,” Christine said.

Doctors gave Madeline diuretics to drain the fluid that had collected around her heart. Within three days, she’d lost 30 pounds of fluid and doctors were able to take her off supplemental oxygen.

“I could move and breath again,” Madeline said. “I just felt so much better.”

Doctors told Madeline that she had viral myocarditis, an inflammation of the middle layer of the heart wall caused by COVID-19. They explained it was one of the rare cases where a virus causes the immune system to overreact.

“The immune system freaks out and it’s like all ‘code red’ inside your body,” she said.

Nine days after going to the ER, she checked out of the hospital and headed back to her parents’ house. While recovering, she was frustrated by social media downplaying COVID-19 risks, especially for young people. So, she shared her experience.

Her post drew around 300 comments and was shared more than 1,900 times, spurring several media stories. She also heard from others who’d endured experiences like hers. She found comfort in being part of a club that none of them ever wanted to join.

“It’s just nice to have someone who has had a similar experience,” she said.

Christine said the entire ordeal taught her more about her daughter.

“I knew she was a great kid,” Christine said, “but this really showed me how much of a warrior she is.”

In January, Madeline returned to her Philadelphia apartment in time for the new semester.

She continues to recover and still gets fatigued if she does too much. She’s walks for about 30 minutes a few times a week to rebuild her stamina.

“At first, just going up the stairs would mean I’d need an hour nap,” she said.

Madeline keeps in contact with her cardiologist and has medication to help her heart recover. She tries to avoid sodium and eat healthy and is careful to get plenty of rest. Her doctors aren’t sure what the long-term effects will be and recommended she avoid becoming pregnant for at least five years.

Although her reaction was rare, Madeline, now 21, said she hopes others take seriously the risks of COVID-19.