Conspiracists Say This 5G Chip Is in the COVID Vaccine. It\u2019s Just a Guitar Pedal.

Look, you have to hand it to conspiracy theorists—they come up with some truly incredible stuff.

When last we checked in on 5G truthers, they were buying fake Faraday cages because they believed the fifth generation of broadband cell networks spreads COVID-19, and if they put their WiFi routers in the metallic boxes, they’d be protected from the harmful radiation. (Just go with it.) In a fun twist, those who bought the router guards disguised as the real thing were mad when they did, in fact, block their WiFi signals … just not the 5G radiation.

Now, 5G conspiracy theorists are at it again, and this time they’ve upped the ante by spreading a hoax that will appeal to metalheads.

Last week, software engineer Mario Fusco revealed on Twitter that in Italy, people had begun sharing a diagram of “the 5G chip that has been inserted in the [COVID-19] vaccine.” The diagram, seen below and labeled “confidential”—that’s how you know it’s legit—shows several elaborate circuits that apparently make up the microchip that the world’s governments have secretly snuck into the life-saving vaccines. 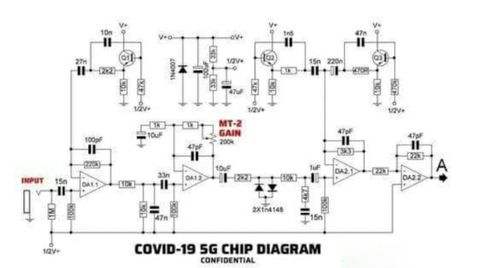 Sadly, the schematic in question isn’t that of a sinister microchip, but rather, something arguably even more evil: a totally bitchin’ Boss Metal Zone MT-2 guitar pedal, meant for shredders summoning the sounds of the devil from their six-strings.