A woman had to have a drastic nose job using cartilage from her ribcage to repair damage left by an operation she had when she was just 13 years old.

Megan, whose surname and age aren’t known, had a nose job while she was still in school after her mother agreed to pay for it because her daughter was bullied.

But the two operations went catastrophically wrong, leaving her with a misshapen, bumpy nose for decades.

Now an adult and living in Sarasota, Florida, Megan flew to Los Angeles to see Dr Paul Nassif and Dr Terry Dubrow, who star in the TV show Botched, to see if her nose could be saved.

They told her the first surgeon removed too much cartilage from her nose, leaving it thin and weak.

Dr Nassif said her nose was ‘so risky’ to operate on because it was ‘falling apart’ but he agreed to take on the challenge. 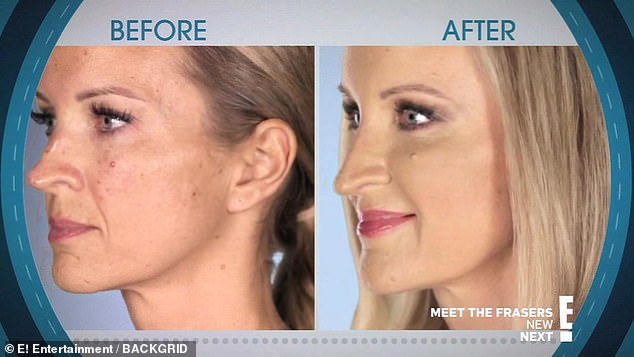 Megan, whose surname and age aren’t known, asked the Botched doctors to fix her nose after the first surgery she had aged 13 went wrong. Pictured before and after the surgery 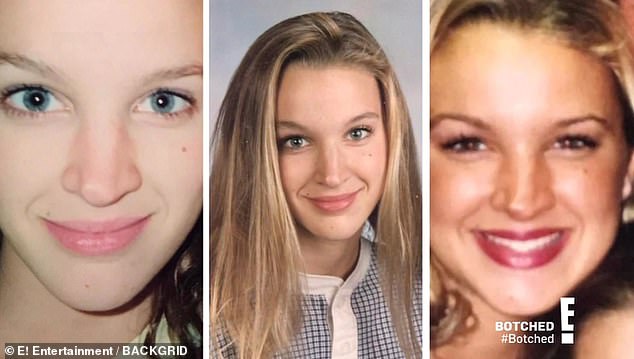 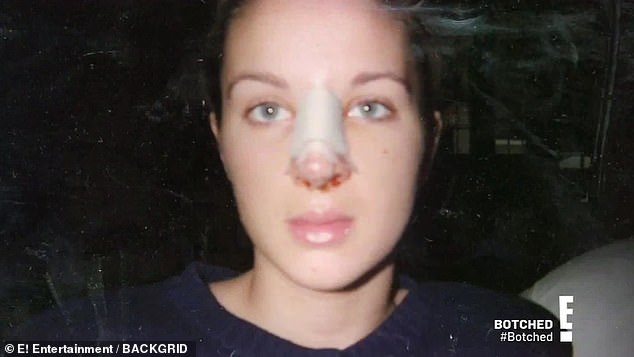 On the E! programme, Megan said she had been constantly teased as teenager so her mother agreed she could have plastic surgery, but the first one wasn’t a success.

A few years later, while she was still in high school, Megan went back to the same plastic surgeon for a second surgery.

Her nose had been left crooked, bumpy and dangerously weak after the first surgeon stripped out too much of the cartilage.

Appearing in the Botched consulting room, Megan had her nose examined by Dr Nassif and Dr Dubrow, who then agreed to operate again to repair it.

They took cartilage from Megan’s ribcage and used it to rebuild the bridge of her nose, making her nose strong and straight again.

Megan admitted to being impatient and thinking her nose was still too large at her first post-op checkup.

She admitted: ‘I’m not a patient patient!’ as the doctors told her that the swelling would go down.

But several weeks later a delighted Megan revealed her new nose to husband Nick and other family and friends.

She said: ‘I love it! It looks so smooth and straight. Now I’m getting all the attention instead of my hot husband!’

WHAT IS A NOSE JOB?

A nose job – or a rhinoplasty – is an operation to change the size and shape of the nose.

In the UK, the procedure is not usually available on the NHS for cosmetic reasons, but may be if the surgery is to help you breathe.

All independent and hospital clinics that carry out the procedure in England must be registered with the Care Quality Commission, which publishes inspection and performance reports.

The surgery may involve making the nose smaller by removing some of the cartilage and bone, or making it larger by taking cartilage from the ears and bone from the hips, elbow or skull.

The shape of the nose can also be changed by breaking the bone and rearranging the cartilage. And the angle between the nose and the top lip can be reshaped.

Both operations taken between 90 minutes and three hours, with patients being required to spend one or two nights in hospital.

Most leave hospital with dressings in each nostril and a splint held over their nose with tape, which means they can only breathe through their mouths.

You may need to take up to three weeks off work to recover and it may be up to six months before the swelling has gone down enough to see the effects of the operation.

Common side effects after a nose reshaping include a:

Occasionally, the surgery can cause permanent breathing difficulties, damage to the cartilage between the nostrils, an altered sense of smell or heavy nosebleeds.

As with all operations, it can also cause excessive bleeding, blood clots, infection and allergic reaction to the anaesthetic.