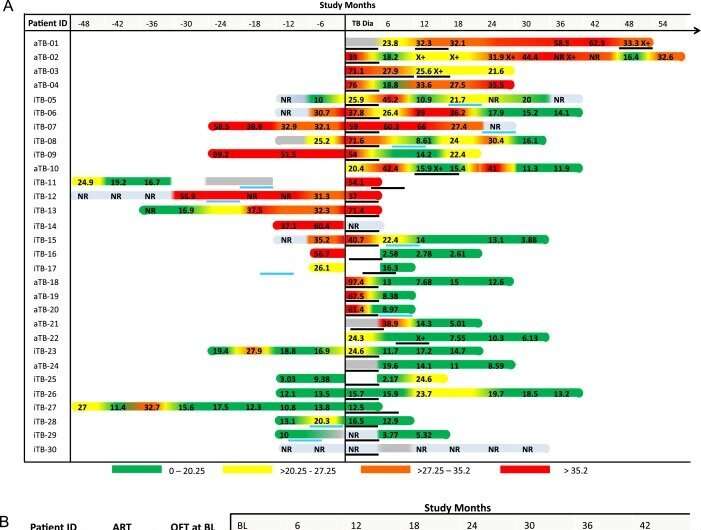 According to the World Health Organization (WHO), one-quarter of the world’s population is estimated to be infected by TB bacteria, Mycobacterium tuberculosis (MTB), which can cause tuberculosis (TB). Although it is preventable and curable, 1.5 million people die from the infectious lung disease each year. TB is also a leading cause of death for people living with HIV. Most people infected with TB bacteria remain in a stage of latent TB and never develop TB disease. However, about 5 to 15% of people with latent TB may develop active TB disease in the future and potentially spread it to others. As X-ray and CT diagnostics are too unspecific for early and accurate detection of subclinical TB disease, there are to date no diagnostic tools to assess TB disease activity in living patients during clinically latent TB or during a HIV/TB coinfection.

In collaboration with the AFRICOS Study Group, a research team led by the DZIF scientists Director Michael Hoelscher, Christof Geldmacher and Inge Kroidl from the Division of Infectious Diseases and Tropical Medicine at the LMU University Hospital Munich and Col. Julie Ake from the U.S. Military HIV Research Program (MHRP), Walter Reed Army Institute of Research, sought to understand the dynamics of TB disease activity. Within the AFRICOS cohort, the researchers assessed TB disease activity over five years in people living with HIV who are co-infected with MTB. The study team used a blood-based biomarker throughout multi-year follow up, combined with a yearly assessment of MTB occurrence in sputum. Their results are published in eClinicalMedicine.

Established by MHRP in 2013, AFRICOS is a systematic longitudinal cohort study of people living with HIV and of HIV-uninfected adults. The study is conducted at eleven clinics across five geographically distinct HIV treatment and care programs, which are supported by the U.S. President’s Emergency Plan for AIDS Relief (PEPFAR) in Kenya, Tanzania, Uganda, and Nigeria.

“AFRICOS, a 15-year longitudinal study, is helping us capture the broader picture of the overall health of our HIV-infected patients, including outcomes data on co-infections such as TB,” said Col. Julie Ake, M.D., the director of MHRP and the AFRICOS lead investigator. “The progression of latent TB to active disease can be life-threatening to people living with HIV, so an early biomarker for active TB disease could be a critical tool to profoundly improve clinical outcomes for patients with this co-infection.”

For this study, HIV-infected AFRICOS participants were randomly selected from existing clinical patient lists or new enrollees at the clinics. Between January 2013 and August 2018, the participating African clinics screened 2,014 people with HIV annually for active TB using the Xpert MTB/RIF diagnostic assay. In addition, the scientific team examined longitudinal blood mononuclear cell samples from HIV-infected participants before, during and after diagnosis of microbiologically confirmed active TB and TB recurrence, as well as patients with a clinically latent TB infection over up to five years.

Based on these samples, the researchers analyzed the activation status of MTB-specific CD4 T cells as a surrogate biomarker to diagnose TB disease in HIV-positive patients. Christof Geldmacher explains: “Activated MTB-specific CD4 T cells in blood are a sputum-independent surrogate biomarker, which has been shown to differentiate between latent and active TB disease with high accuracy and hence mirrors in vivo TB disease activity. Assessment of these over time is possible and does not require repeated exposure of patients to Xray/CT related radiation.”

Blood-based biomarker could facilitate the early detection of incipient TB

The laboratory analysis showed that the MTB-specific CD4+ T cell activation differentiated active TB (Xpert MTB/RIF positive result) from latent TB with a sensitivity and specificity of 86% in study participants living with HIV. In many cases, the progression to active TB disease, characterized by activated MTB-specific T-cells, started six to twelve months before the diagnosis by clinical symptoms and sputum occurrence of bacilli. This provides evidence for the onset of disease active TB long before a sputum-based TB diagnosis.