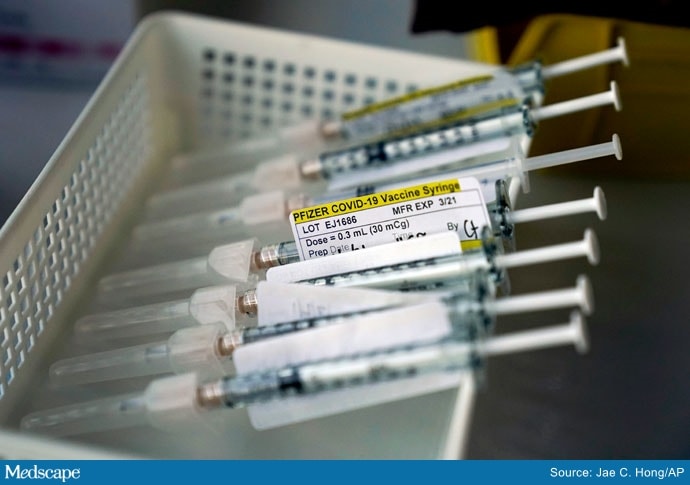 Syringes containing the Pfizer-BioNTech COVID-19 vaccine sit in a tray in a vaccination room at St. Joseph Hospital in Orange, Calif.

As the speed of covid vaccinations picks up, so do the reports of doses going to waste. And it’s more than just a handful at the end of the day because of a few appointment cancellations. Health officials are trying to rein in waste without slowing down vaccinations.

The incidents range from 335 discarded doses in Lee County, North Carolina, that were damaged in shipping, to nearly 5,000 doses that went to waste in Tennessee in February, prompting additional federal oversight.

“I definitely have been losing some sleep over this, for sure,” said Beth Ann Wilmore, nursing director at Mercy Community Healthcare in Franklin, Tennessee. She manages the covid vaccine inventory at the nonprofit clinic, which started receiving shipments a month ago.

Clinics like Mercy are accustomed to handling vaccines, but none so precious as those for covid, which have special refrigeration needs.

“I was definitely waking up in the middle of the night wondering how the temperatures were doing, and thinking, ‘OK, I hope it’s good, and it’s not giving me a flag or anything.'”

Many community health centers are receiving the Moderna vials, which are easier to handle than the Pfizer-BioNTech vaccine but still tricky. The vials last 30 days after they’re out of the deep freeze, compared with only about five for Pfizer. But once the seal on the vial is broken, there are just six hours to use the shots.

So far, no waste has occurred at Mercy. But Wilmore has heard horror stories from around the state.

In neighboring Murfreesboro, Tennessee, the local school district received a thousand doses for a teacher vaccination event the last weekend of February. But they were put in an unapproved freezer. The temperature sensor on the shipment flashed an error code. Out of caution, they were advised to throw them all away.

“It hurts my heart,” said Dr. Lisa Piercey, health commissioner of Tennessee, which has disclosed one of the country’s biggest spikes in reported spoilage.

She said the losses are painful because the shots are “priceless” in the midst of this deadly pandemic. But it’s one risk of having so many places to get the vaccine.

To increase access and equity, there are now more than 700 vaccination sites across Tennessee, with more planned to open as vaccine shipments grow in the coming weeks.

“It definitely raises the level of concern when you have more partners — particularly partners that are not under your direct control,” she said.

In Knoxville, a thousand doses were thrown out, apparently confused for a related shipment of dry ice. In Memphis, the county health director has resigned after being slow to disclose that nearly 2,500 doses were allowed to expire on several occasions — related to winter weather as well as poor management in the county’s pharmacy.

The state has called in staff from the Centers for Disease Control and Prevention to monitor vaccine distribution in Shelby County and stepped up audits for all local health departments in the state.

There are so many opportunities for doses to go bad. In West Palm Beach, Florida, the power on a mobile refrigerator was turned off. In Connecticut, a fridge door didn’t close properly, though the doses were salvaged in time in consultation with Moderna.

Dr. Kelly Moore, deputy director of the Immunization Action Coalition, said a little spoilage is expected. It’s still well less than 1% of doses, even in states like Tennessee and Florida that have disclosed big losses.

“I would be more worried if I saw reports of zero doses wasted,” Moore said, because then her concern would be a lack of transparency.

“You want to see some waste because that means people are paying attention and that real-world accidents happen and that they’re being responded to properly,” she said. “You just don’t want to see negligence.”

There’s hope that mishaps will be easier to avoid with the newly authorized Johnson & Johnson vaccine. Aside from being a single dose, it can last in a normal refrigerator for months.

This story was produced in partnership with Nashville Public Radio , NPR and KHN.